More Pics for Wineauxs to Love 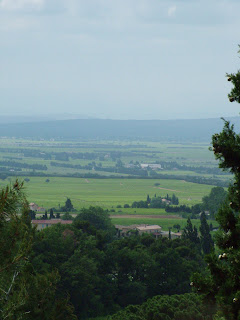 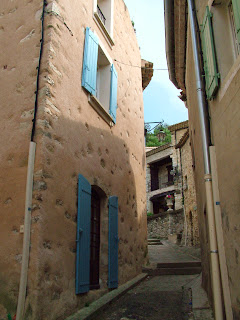 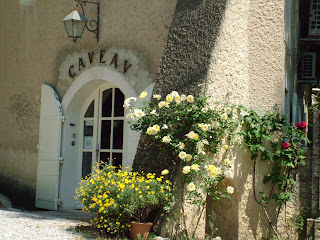 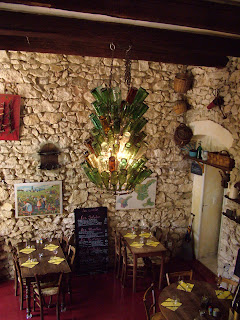 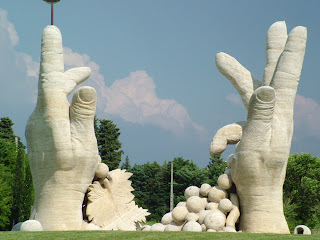 These hands are about 20 ft tall and not far from Gigondas. They were showcased in a roundabout. There were several places in the Cote du Rhone that had grapevines in the roundabout. So cool - I'm wondering if they'd do that on Chapel Hill Road??? :)
The other photos above are Gigondas and Saint Cosme.

Photos of Saint Cosme & the village of Gigondas 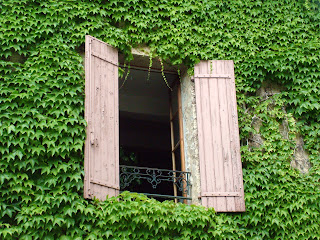 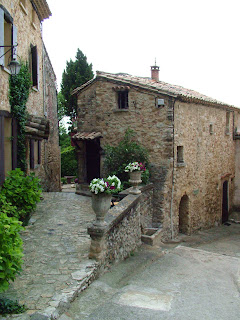 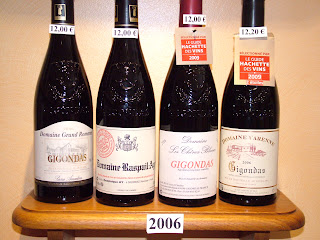 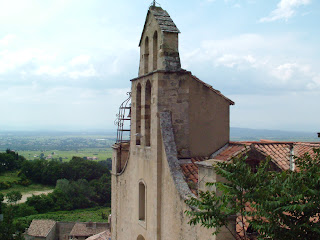 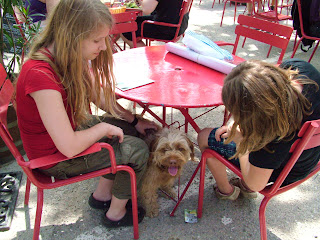 AS y6oiu can see the Barroul family dog was so happy we visited, it escourted us to town! 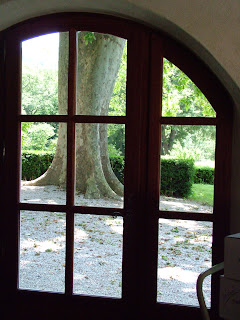 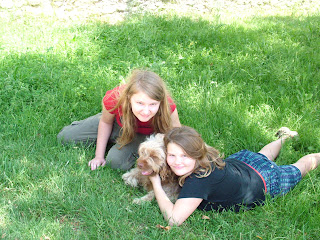 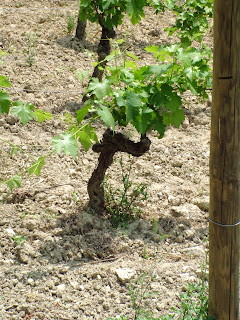 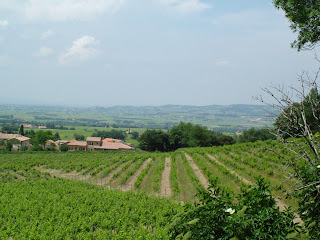 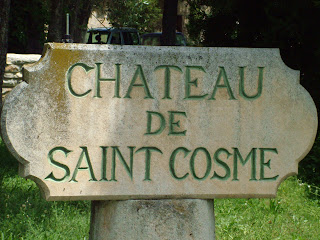 North of Avignon by way of Carpentras, sheltered by the hauntingly beautiful Dentelles range is the famous wine producing town of Gigondas. I had heard of this part of the Cote du Rhone but it really picked up on my radar when Paul of Top Ten Wines turned me on to a glorious red wine from Saint Cosme. Imagine my surprise when we are driving down the road and voila - there in front of us was the place - the actual Chateau de Saint Cosme. Named for the patron saint of Gigondas, this working winery and vineyard dispenses quickly with any pretense. A friendly dog greets all who enter the small drive and provided a welcome diversion for Cameron and Caroline who have little interest in wine. The 14th generation winemaker, Louis Barroul and his family live on site. One would think it has nothing to do with viticulture or enology, but there was something reassuring and expected with seeing a bicycle and the of small children about. This was a terrior well connected to the human as the family to the land. The wines of Saint Cosme demonstrate this respectful symbiosis. One wine that stood out among all I tasted the was the 2007 Gigondas. I bought two bottles - with a silent prayer to the Customs God. One to watch is their table wine, Little James Basket Press Vin de Table. With Chateau direct prices at just over a mere 4 euros, word from the Chateau is US wine merchants are very interested in both the Little James and the Saint Joseph. The Little James is a whole lot of wow for the price - fat and round with berry and spice and those wonderful earthy notes I so love about good Cote du Rhone wine. The 2006 St. Joseph is selling for an average of around $45 in the US. It can be purchased from the estate for 14.20 euro.
There are 15 hectares (about 37 acres) of old vines around the estate with an average vine age of 60 years. Yields are kept very low at around 27 hectoliters per hectare (about 2 tons per acre). The soil is limestone and red clay but somewhat geologically complex. Grenache is king here, but often blended with Syrah, Cinsault, Carignane, Counoise or Mourvèdre.

The village of Gigondas (pop. 650) is a place fairy tales are made of. Check out our photos for more.
Posted by Tam at 12:52 PM No comments: 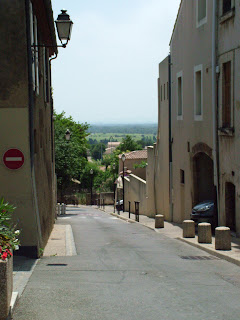 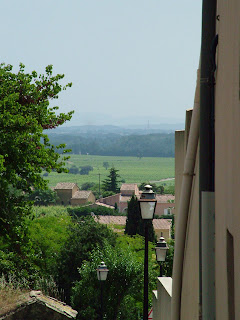 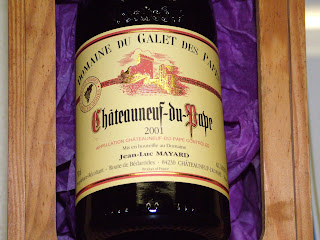 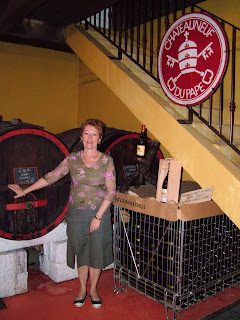 Maybe I've just been lucky or perhaps I have one of those faces that automatically evokes sympathy, but I have yet to discover where they hide those American hating French. "It was a fluke!" I was told in 2006, the first time I brought Cameron and Caroline to France. I was assured it was not typical and it must have been beginners luck, because if you are not perfectly fluent (i.e. undetectable as a non-French person) they do not like you and if they find out you are American, you are really screwed - so I was told.

I don't know what those other travelers did to invoke their own troubles, but I am here to tell you the French people are some of the most wonderful people on the planet. Thus far, I've had simple things and one or two major (or what I may consider major frustrations) and have had many benevolent people to come my aid. My French was so awful one person thought I was Dutch. Although I readily admitted I was American, their offer of assistance never wavered. They helped me anyway - with smiles on their faces and kindness in their hearts.

In my wine education, one of the more kind and beautiful women I have met thus far was Helene Maynard of Domaine du Galet des Papes in Chateauneuf-du-Pape. She and her husband, Jean-Luc, represent 5th generation wine growers. The Maynard family owned property in Chateauneuf-du-Pape during the time of Napolean III. There had been a festival we missed the previous Saturday, so Monday must have been a lazy sort of day in the village. Many of the wineries and wine caves looked somewhat deserted, so I felt I was imposing a bit on Madam Maynard when I rang the bell. If there were any imposition, her welcoming demeanor and hospitality hid it well. The most pleasant surprise was the taste of her wine. Coming in at half the cost of many Chateauneuf-du-Pape wines, the Domaine du Galet des Papes held its own, especially in the famous 2005 vintage.

Arrival in Nice did not get off to a good start. We flew EasyJet from London. Many American airlines could take lessons from these folks; newer planes, good basic service and as Cameron said, better pilots. ;) She's sure that this pilot should offer the British Airways chap lessons on how to land (I still shudder at the memory). We picked up our car without a problem but soon discovered our GPS did not know how to speak French. Although my Garmin is supposed to be loaded with complete European maps, we're beginning to doubt its accuracy. In addition, she (the voice is female) butchers the French language much worse than I ever could (& that's saying a lot) so we're never quite sure what street or where she is referring to. After taking 45 minutes to get to our hotel (in what should have been less than 10) Cameron and I were ready to strangle her - or at least perform a sex change and turn her into a man.

Nice is a place into itself - just worn enough to give it character and make it a bit more alluring. We loved walking the Promenade and the Old Town. We had a great dinner in a sidewalk cafe and gelato for dessert. We decided to take a long stroll back to the hotel and in doing so, it appears we were out a bit late. We started to notice these beautiful, and I do mean gorgeous girls standing on every street corner. When we passed the first one I assumed it was a woman waiting for her date to bring the car around. She was beautifully dressed, maybe a little sexy but not distasteful and knock-down-dead gorgeous. By the time we passed the second, the "light" (or would that be red light?) went on and I was like - OMG. Truthfully, I felt very sorry for them, wondering what had happened in their lives to make such beauty resort to something so dangerous and demeaning. While most well dressed French women wouldn't hesitate to meet your gaze, I noticed these women looked away from a mother walking with her two children. The further west we walked, the less pretty and well dressed they became until they began to be readily identifiable for their trade. And as for overly sheltered, poorly socialized homeschoolers? Let it suffice to say Caroline now knows what prostitution is. I think we'll stick completely to the east end from now on.
Posted by Tam at 2:46 AM 1 comment: 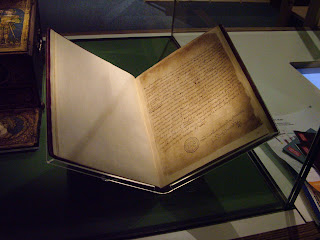 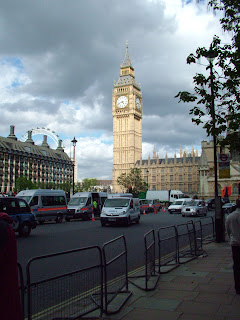 London officials are probably looking for me for the 1st pic (above). I took it before I saw that no photos were allowed. It is a photo of King Henry VII's love letter to Anne Boleyn, on loan from the Vatican. Hmm, how did the Vatican come by it anyway? The second pic is at Trafalgar Square and the third is self explanatory except that the police had the park square to the left surrounded due to a protest.
Posted by Tam at 2:38 AM No comments: 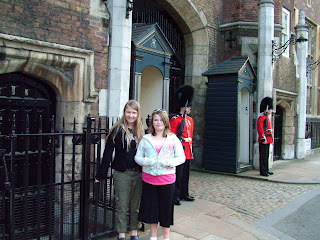 Several glitches with our laptop and WiFi have really cut into our time in London - perhaps the cost of being too dependent on the Internet for information. A train strike was scheduled for the day we were headed to Gatwick, so I was a little panicked at not being able to check the site. Thankfully, we were able to board the Gatwick Express with no problem.

We visited the Tate, which we missed last time. I love the art museums, but always feel a slight disappointment knowing it would take days to begin truly appreciating most of these works. The Victoria and Albert Museum was nice, though Caroline seemed disappointed it was about their Majesties. She had watched the movie on the way over on the plane and has now added Victoria to her interest in royalty.

Speaking of her interest, we had to walk by St. James Palace just in case we might be able to catch a glimpse of the heartthrob Prince (That's William, not Charles ;) ). It gave me the change to take a photo of the girls in the exact spot I took it three years ago (see above)

Cameron opted out, but Caroline and I had dinner at Gordon Ramsey's Maze. It's a bit out of the way, but the food is fantastic, some of the best I've ever had in London.
Posted by Tam at 2:32 AM No comments: 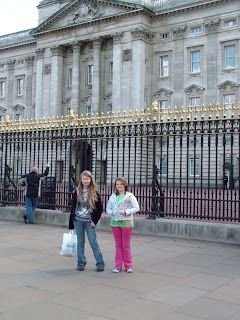 I learned a new version of the meaning of rock and roll when our 777 landed at Heathrow. The pilot had mentioned it was "blustery" in London, but I had no idea that those wind gusts would rock a mammoth plane like that. I'm not a fan of flying as it is and usually feel safer in the jumbo jets - but oh my.
Although the flight itself was rather smooth, neither Cameron, Caroline or I were able to get much sleep. There was a particularly difficult two year old across the aisle and our nearest neighbors were very restless.
After we checked into our hotel, we roamed Knightsbridge and picked up some goodies at the food hall in Harrod's. We picnicked in Hyde Park, walked to Buckingham Palace and rode the Tube. As we were going down Brompton Road, Cameron announced, "I feel like I've come home!" I'll second that feeling. I heart London.
We have had major frustrations with the cell phone and the wireless on the computer, but we're working on it.
Posted by Tam at 3:58 AM No comments:

We're flying out of St. Louis today to Chicago to catch British Airways to London to begin another "extreme field trip." Although last time we stayed long enough to really soak up the sites in London, on this trip we're using as our starting point. We'll be staying a few days to re-visit old favorites and then we're catching a flight out of Gatwick to the south of France. There we will be taking some time out to further Mom's education in French viticulture and enology (or oenology as I will be spelling it there ;) ) as well as doing a bit of sightseeing. It's that time of year, so if we're feeling particularly brave, we might have to visit the Cannes Film Festival just to say we did.

I don't feel as well prepared for this trip as I have for others. In the past, I often did a lot of pre-trip research. Between a change in dates, an overloaded schedule and a recent trip to Chicago, I haven't been able to do as much research as I would have liked. I'm not going to sweat it too much though - and I'm going to try and reassure myself by focusing on the value of spontaneity. Some of the most wonderful experiences we've ever had on trips in the past were completely unplanned.

See you on Monday in London!
Posted by Tam at 10:26 AM No comments:

Yes, this is what happens when you let a homeschooling mom and her two kids of the house.